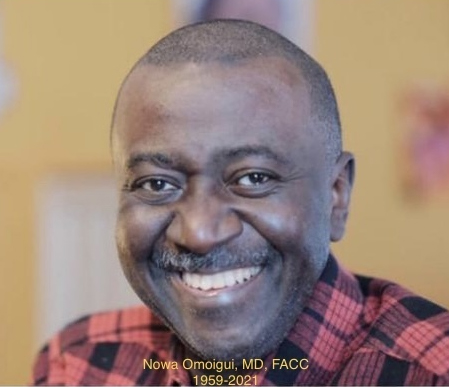 Nowa Omoigui shattered the glass ceiling in Cardiology by being the first Nigerian immigrant to serve as Chief of Cardiology of a major University Medical School in the United States – The University of South Carolina, Columbia. His achievements ushered in a new era of possibilities. He inspired new generations of young Africans and African Americans in cardiology worldwide. He chartered a new course, allowing us to redefine our future. By his example, we know that there are no limits in pursuing our dreams in the field of cardiology. We celebrate his life this week.

Nowamagbe Omoigui was born on March 28, 1959, and passed on April 18th, 2021. He was a precocious talent who set records everywhere he went. He graduated from high school at age 15, from Federal Government College, Warri in Nigeria. He graduated with distinction and set a record as the first in the history of the school (and one of the first in West African History) to obtain a Grade A1 in Fine Arts. In 1975, after a year of pre-Med at King’s College in Lagos, he gained admission to study Medicine at Nigeria’s premier Medical School, The College of Medicine, University of Ibadan. In 1981, he graduated at the top of his Medical School Class with distinction and delivered the valedictory speech. After an internship, he spent a mandatory year of service at the Brigade of Guards where he set new records by coordinating air, sea, and land military disaster drills, and received a National Award from the Nigerian President Shehu Shagari in 1983.

In the U.S., he did an internal medicine residency at St. Mary’s Hospital in Rochester, NY, and served as Chief Resident at Cook County Hospital in Chicago. He obtained a Master’s in Public Health from the University of Illinois. He trained in cardiology at Stanford University and in interventional cardiology at the Cleveland Clinic (America’s best heart center). Nowa continued his tradition of collecting awards and setting records in the U.S. He was awarded the Timothy Beckett (1992) and Hewlett Packard (1993) Awards, and Awards for excellence as a post-doctoral fellow in Cardiovascular Disease. He set the all-time record among clinical fellows at the Cleveland Clinic for the highest number of abstracts submitted and presented (as first author) at a single National meeting (American Heart Association 1994). Importantly, he set a new record when he became the first Nigerian (African) immigrant to be Chief of Cardiology at a US university medical school in December 1994 at the age of 35. Perhaps the youngest to do so.

At the 1995 American College of Cardiology Conference, while I was presenting as a young cardiology fellow from Boston and my compatriot, Dr. Akinboboye was presenting as a young instructor from Columbia University, we were both delighted to see Nowa on the podium as a guest faculty of the American College of Cardiology. It definitely opened our horizons. If Nowa could be up there, we too could. This trend has continued till today with young immigrants and young African Americans in leadership positions in every aspect of cardiology in the United States.

In 1996, when I visited him at the University of South Carolina, Columbia, he was the Chief of Cardiology, the Program Director of Cardiology Fellowship, Director at the VAMC, and the Chairman of the Governing Board of Regents. The night of my visit, during the war of the Desert Storm, Nowa logged into the high-level, War-Room that was full of Military Generals, discussing tactics and strategies of military warfare. On Saturdays, he would email me his weekly political write-up for me to proofread, which I would send back to him on Sundays. That opinion would be published in his weekly column in the popular Nigerian newspaper, The Guardian.

Before the advent of the internet, Nowa would give you facts and figures about events. By the time you checked, he would be correct about the date, time, place, and everything else. His brain was like a walking encyclopedia. He was a preeminent cardiologist, an academic researcher, a prolific writer, a masterful orator, a military and Nigerian historian, and a genius. Despite his record-setting achievements and his intellectual prowess, he was always humble, easily approachable, always ready to help the younger physicians. When he got comfortable with you, he would crack joke upon joke, and you would think he was a comedian. I miss his laugh.

While on this earth, Nowa ensured that his name was engraved in record books for the ages We pray that God engraves his name among His greatest servants and grant him glory and eternal life in Heaven.

Nowa, we celebrate you today. Rest in Peace.

We invite you to share your memories, stories, and reflections.

DENISE wrote on July 19, 2021
HE WAS A CARING DOCTOR.ALSO THE GREATEST DOCTOR EVER ! HE WILL TRULY BE MISS.

Larry S. Perry M.D. wrote on May 27, 2021
I am a retired cardiologist and I am very proud of the commitment ,love of mankind that Dr. Nowa Omoigui displayed. He was gifted and made a difference ,blessing to all. Larry S. Perry M.D.